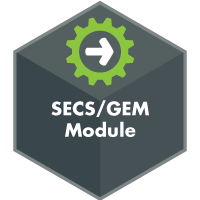 The newly released SECS/GEM driver for the semiconductor industry has been improved!  It now supports SECS-I (serial).  The first release only supported HSMS (Ethernet) messaging, but as it turns out, there is still a lot of legacy equipment out there and most of it only supports SECS-I communications.  You would think this to be a simple thing to implement but it wasn't that easy.

TCP/IP has a lot of stuff built into it that gets leveraged for HSMS but when you get to SECS-I serial you lose that and you've got to build a lot of stuff from the ground up.  But that's been done now and the new SECS/GEM module can now be downloaded from our module marketplace.

We are in the process of adding simulator functionality to the SECS/GEM module as well, so that testing and development can be done in the absence of actual equipment and so that equipment definition files can be tested.