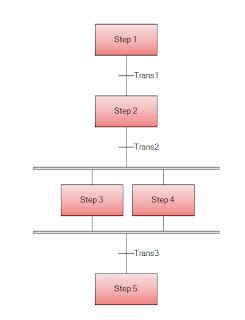 You say, "sequential function charts, who uses those?"  Turns out lots of people do.  Sequential Function Charts (SFCs) are part of the IEC61131-3 programming languages.  One usually thinks of SFCs as a PLC programming language, which is true, but SFCs are also used in industrial software applications quite extensively.

Personally, I seldom used SFCs in PLC programs.  I felt much more comfortable using ladder logic.  But customer feedback from a variety of industries shows the extensive use of SFCs in specialized application programs.  In fact, one customer calls them "everything a PLC isn't", referring to the fact that they excel in highly supervisory roles with long running processes requiring advanced logic handling capability.

There is another aspect of SFCs which doesn't exist in the PLC version (at least not to my knowledge) and that is instantiation.  What this means is when you develop SFC diagrams you are actually developing templates, but when you run them you actually run a copy, or instance, of the template. Think of the uses.  SFCs could act like paper tracking and routing forms on the plant floor except with SFCs everything is kept in a database.

Here's an example in the manufacture of widgets.  For every widget you plan to build you instantiate a new SFC and pass it parameters such as work order number, part number, etc.  The SFC instructions could handle every aspect of the widget's subsequent routing through the manufacturing process and would write all the information off to a database.

Instantiated SFCs could track batches in a chemical process, discrete parts, parts assemblies, practically anything.  They could even handle the routing and tracking of front office paperwork.  Paper forms could be replaced with electronic versions which are automatically routed using instantiated SFCs. The instantiation is the form, so using actual paper forms is unnecessary.  Save a tree!

Think of SFCs as script supervisors.  Higher level SFCs determine which scripts run when. They also provide a bird's eye view of your program.  Everything you do with SFCs could be done with scripts alone, but you would quickly get lost in the details.  Additionally, SFCs can provide real-time status of scripts which are running and what conditions are required to run non-running scripts.

I'm excited about adding SFCs to Ignition because they add a whole new dimension to what you can do.  I won't give you a time frame for when they'll be done, but I can tell you the development team is well under way now.

I'm curious to see how these are implemented and executed.