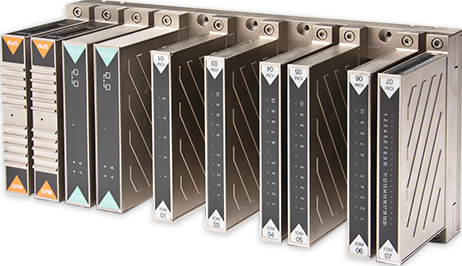 Bedrock Automation.  Never heard of it?  That’s probably because they've come swinging out of
Silicon Valley where anything is possible.  In two short years they've built a cyber secure PLC with OPC-UA built-in.  The operating temperature rating  is -40℃ to +80℃.

All power and communications through the backplane is completely pinless by use of  what they call Black FabricTM  technology.  Not a single pin!


Their goal is to have as few catalog numbers as possible (they stated to me no more than a dozen part numbers).  For example, there is a single module part number for a universal I/O module.  By software configuration alone you can choose any type of industrial input or output, discrete or analog, AC or DC.


I held this thing in my hand and I've never seen or felt anything like it.  It’s rugged!  It’s well built!  I was even told they tried to blow one up by putting it on top of a million volt Tesla coil but it kept working.

I know you’re thinking by now they’re just a flash in the pan.  But I don’t think so.  They are a subsidiary of Maxim Semiconductor.  Maxim has a 7.57B market cap and 8,800 employees.  A brief description of the company follows:


“Maxim Integrated Products, Inc. designs, develops, manufactures, and markets various linear and mixed-signal integrated circuits worldwide. The company also provides a range of high-frequency process technologies and capabilities for use in custom designs. It primarily serves automotive, communications and data center, computing, consumer, and industrial markets. The company markets its products through a direct-sales and applications organization, as well as through its own and other unaffiliated distribution channels. Maxim Integrated Products, Inc. was founded in 1983 and is headquartered in San Jose, California.”


The real question is, will they be able to push this amazing product to the finish line?  If they can actually deliver the product at the price point they told me, which is about the price of a mid-range PLC, then the price won’t be an obstacle.  In terms of hardware, I think it’s already a slam-dunk. Probably what it boils down to now is software.  And for that, I think they have some very cool stuff up their sleeve.

Their choice to build-in OPC-UA is a masterstroke.  While incumbents wearily cling to “has been” protocols, Bedrock is pulling out into first place with its UA adoption.  Welcome to the 21st Century!

Disruption happens when you least expect it.  Frankly, I was shocked to see what Bedrock has accomplished in so little time.  But Silicon Valley moves at a different pace and this company has significant resources.  Commercial release is slated for mid-2015.

Can you share some more detail on your comment "Probably what it boils down to now is software. And for that, I think they have some very cool stuff up their sleeve."

Software is usually the weakest link of the security chain.

For that you should ask them. Not my position to tell.

Watch the video on https://www.bedrockautomation.com/download/.