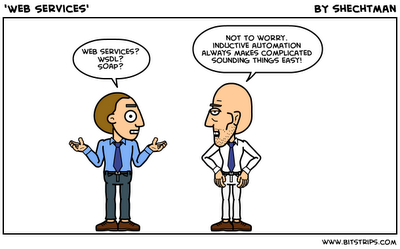 Our modus operandi is to deliver what people want (sometimes sooner, and sometimes later, but always eventually if it is of general interest) . Recently there's been significant demand for Web Services so we undertook development of an Ignition Web Services module.

A definition of Web Services is in order. The following definition has been provided by the W3C Working Group:

Definition: A Web service is a software system designed to support interoperable machine-to-machine interaction over a network. It has an interface described in a machine-processable format (specifically WSDL). Other systems interact with the Web service in a manner prescribed by its description using SOAP messages, typically conveyed using HTTP with an XML serialization in conjunction with other Web-related standards.

With that said, forget the acronyms SOAP and WSDL for now. We plan to make this an easy to use module requiring little or no knowledge of Web Services. The module will act as both a requester and provider of information.

So what can you use it for? You can integrate with ERP systems as large as SAP or small as Quickbooks Pro. You can also integrate with hardware devices such as the iLon SmartServer.

We have a lot of exciting things on our development timeline. This is just one of them. You will be hearing more about this one, and others, soon.
Posted by Steve at 12:02 PM

Thanks for bring this up. From what I can see, version 3.0 of the MultiSpeak specification would be compatible. No promises yet, but both consume WSDL files similarly and both use SOAP. I'll check into this more.

I know its way late but did this module make it to reality?

It is in Alpha right now. I think it should be generally available mid-year.