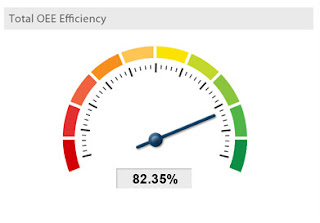 You've heard about OEE for years now. But does it really work? I've got a story for you but first I'd like to comment that OEE is just a tool. You can either use it, abuse it or neglect it.

Some months ago one of our end-users installed the OEE module at one of their facilities that has a lot of lines. A lot of data has been collected but only recently did the production manager started analyzing it. His attention was drawn to one machine on one line by reason of the OEE. On closer inspection he determined the machine was pausing at times for no apparent reason so he called in maintenance. It's not unusual for automated machinery to slow down or pause due to low product supply or backup conditions but this just didn't seem right. By monitoring the PLC logic maintenance was able to trace the problem to an intermittent field IO block that sometimes gave false state information for some photoeyes.

After the part was replaced the OEE jumped up by 10%. They had accumulated a baseline of OEE information and just by replacing this one part the OEE increased dramatically. In this case the faulty component didn't entirely stop production so its effects weren't obvious. It just made the line not run as well as it could.

This brings me back to the main point. For OEE to work it has to be properly implemented and then the resultant data need to be acted upon. When this is done the results can be significant.
Posted by Steve at 10:53 AM